How Much Does a Propane Tank Weigh?

One gallon of propane weighs 4.2 pounds. A “full” 20 lb cylinder should have 4.7 gallons or propane in it. The most common way to measure it is by gallons. It can also be measured by pounds (one gallon = 4.2lbs). When measured in gallons, a meter at the pump is used to determine the amount of propane that has been filled into a tank. When measured in pounds, the tare (empty starting) weight of the tank must be known first. 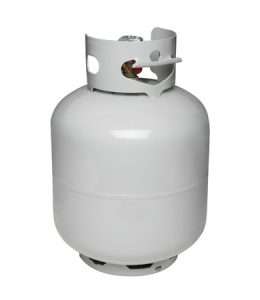 There is also a month and year on the collar indicating the date the tank was made. For 20 lb propane tanks, you have 12 years from the manufacture date before the tank must be re-certified with a new date stamped on it. The re-certification only adds 5 years before having to re-certify again. The cost and inconvenience of re-certifying almost always outweighs the price of a new tank.

Brand new propane tanks may come with air inside and need to be “purged” before the first fill. Some newer tanks, like Bernzomatic, will have a sticker on them saying they don’t need to be purged within 6 months of the manufacture date.

Purging requires a special adapter to allow a small amount of propane in. The pressure then pushes air out of a one-way bleeder valve. Purging may add another $3-4 dollars to a new tank, though some places don’t charge, especially if you buy the tank from them.

A “full” 20 lb cylinder should have 4.7 gallons or propane in it

These “20 lb” tanks are designed to take up to 20 pounds of propane. You may get a pound or 2 less, depending on the temperature of the tank and surrounding air when the tank was filled. Cooler = more propane in, hotter = less in. Tanks can actually fit another 20% in the tank, but that extra space is designed for expansion as the temperature rises.

In very cold winter climates, like Canada, there may be more concern/rules about filling a tank to a complete 20 lbs. This is because if you leave a tank outside in very cold temps, filled the tank when the tank is cold, and then bring it into a hot basement/garage for a space heater, the gas will expand as the tank warms. With enough of a temperature increase, the tank’s pressure relief value will release a bit of gas. This is less of an issue if the relief value is bleeding to outside air.